An innovative program designed to make streets, friendlier and safer for all users including people in cars and those riding bikes and walking.

In March 2015, a Cycling Imagineering Workshop was held in Perth with two guest Dutch transport planners and 140 leaders from the transport and urban planning industry across Australia to explore innovative options to provide a safe and connected cycling network for people of all ages in Perth and regional towns.

A key outcome of the workshop was the allocation of $3 million to trial low-speed, on-road cycling routes, with the resulting Safe Active Streets Program launching in May 2015.

Entering its sixth year and gaining traction within the local community, the program is a key strategy to provide safe walking and riding routes through suburbs to local amenities including schools, parks and shops.

What are Safe active streets? 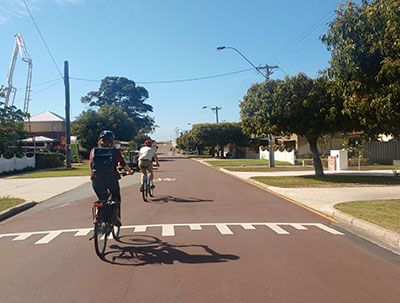 Safe active streets are cycle routes on quiet local streets, where speeds have been reduced to 30 km/h to allow for a safer shared street space. With lower traffic speeds, the streets are much safer for pedestrians and riders of all ages and abilities, as well as for people driving.

At major entry points to the safe active streets, blue-and-white Safe Active Street road patches, 30 km/h speed limit signs and raised platforms help to slow traffic and alert people that they are in a bicycle and pedestrian friendly space.

While the design of each safe active street can vary depending on the environment, a range of measures can be incorporated, for example:

The City of Bayswater Bike Network Plan identifies the need for a local bike route that connects the Swan River foreshore and Morley Town Centre. In 2015, the Department of Transport and City of Bayswater commenced work on the Bayswater to Morley Safe Active Street to help fill this identified gap.

Stage one of the safe active street, which was opened in September 2017, runs along Leake Street and May Street, from the Swan River foreshore to Adelphi Street. This route was chosen because it provides a relatively flat, direct link from bike paths along the Swan River to the Midland line shared path and connects to a number of other local destinations such as schools, parks and public transport.

The route for Stage two of the safe active street is currently under review by the Local Road Safety Trial Reference Group which was established by the City of Bayswater Council in mid-2018. 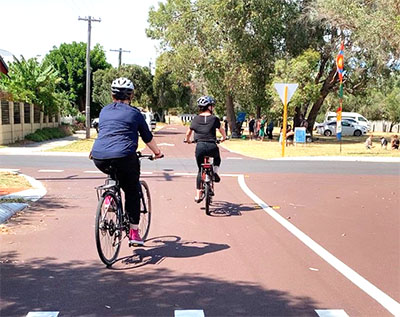 Whitfield Street in Bassendean recently became a Safe Active Street, promoting a new shared street space. This 2.3km route safely links people from Guildford Road to the Sandy via the Bassendean Town Centre, Palmerston Square Park, Bassendean Primary School. The introduction of a 30km/hr speed limit provides walkers, riders and drivers a safer, quieter space to move, encouraging people to jump on their bikes and or walk to local sites.

This route was identified in the Town of Bassendean’s Local Bike Plan in 2012 and the Long-Term Cycle Network which was endorsed in 2020. Community consultation commenced in 2018, and with local support the route was constructed in 2020, and officially opened in January 2021.

Residents will notice some other changes along the route including new priorities at intersections allowing for continual movement along the route; additional trees to create a comfortable, shaded space and curb improvements that make connecting from the street to paths easier. A shared path at the southern end of Whitfield Street (cul-de-sac) also joins the Sandy Beach Reserve and the future Nature Play space.

The route will be enhanced by future improvements by the Town of Bassendean for Palmerston Square Park and surrounds including bike repair stations, water fountains, shaded rest areas and signs to help you find your way around. 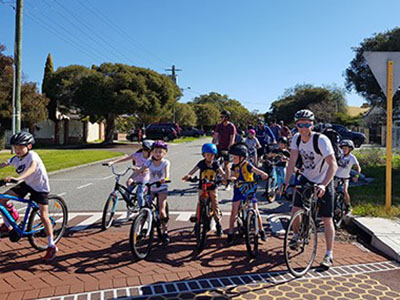 Stage 1 of this project route runs along Shakespeare Street from Green Street in Mount Hawthorn and connects to the Scarborough Beach Road separated bike lanes which were installed by the City in early 2015. The second stage continues south of Scarborough Beach Road along Shakespeare Street and Scott Street, through to Richmond Street. It also includes a link to the Mitchell Freeway PSP via Bourke Street.

This safe active street has a very large potential catchment area and provides an alternative to the Principal Shared Path along the Mitchell Freeway. Shakespeare Street was one of several options investigated, and was chosen because it:

This project was funded by the Safe Active Streets Program and constructed by the City of Vincent. The project was delivered in two stages and completed in 2019. Further expansion of the safe active street to the north is under consideration. 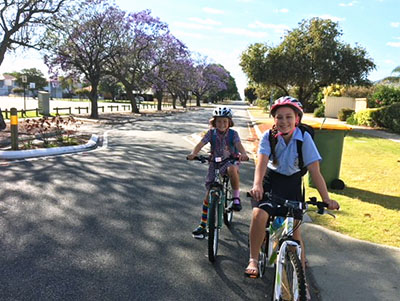 Surrey Road Safe Active Street is a 4.4km link between the Graham Farmer Freeway principal shared path (PSP) and the Leach Highway PSP. The route follows Surrey Road through to Cohn Street and includes upgraded facilities at the Great Eastern Highway underpass. A new path has been constructed at Tomato Lake, linking the route to President Street, Jeffrey Street and connecting to the PSP at Leach Highway.

This route was preferred as it could allow for safe access to local destinations while also providing direct links to the existing cycle network.

The construction of all intersection treatments and the Great Eastern Highway underpass improvement is now complete. Traffic speed has been reduced to 30km/h in this area. The changed road environment is promoted to path and road users with Safe Active Street pavement markers and white and yellow bike symbols painted on the road.

More information on this project can be found on the City of Belmont website.

The City of Nedlands Safe Active Street will travel along Elizabeth Street and Jenkins Avenue, providing a link across the local area from Broadway to Bay Road. A number of parallel streets were considered for this project. The Elizabeth Street and Jenkins Avenue routes was ultimately selected due to its existing low traffic volumes, low traffic speeds, and connections to local amenities (schools, shops, university, sports fields, parks).

Community consultation on the project was undertaken in early 2018 and a concept design was supported by the community and approved by Council. The designs were finalised in early 2019 and construction was completed in November 2020.

More information on this project can be found on the City of Nedlands website.

The route was identified as a candidate for a safe active street in the development of the Geraldton 2050 Regional Cycling Strategy. Once constructed, it will help create a safer, slow speed environment that encourages people to walk and cycle to schools and recreational reserves and the existing and planned local cycle network.

A key benefit of the program is that it also encourages additional greening opportunities, enhancing the local amenity for all users.

Now under construction, with completion anticipated in the first quarter of 2022. Once constructed, will be the first safe active street built in regional Western Australia.

More information on the project can be found on the City of Greater Geraldton’s website.

The route provides a safe active link between Garden City Shopping Centre and Riseley Street Activity Centre. It also passes by Applecross Senior High School and Ardross Primary School. Now completed the link provides a create a safer, slow speed environment that encourages students to walk and cycle to school and connects people to the existing and planned local cycle network in Ardross and Applecross.

The designs and construction has now been completed.

More information on the project can be found on the City of Melville website.

A Safe active street has been proposed on Gibb Street between Railway Parade and Welshpool Road. A concept design has been completed, DoT is currently working with City of Canning to present these concepts to the community for input and feedback. Pending the outcome of this engagement, the project will be considered for Detailed Design and Construction funding in 2021 as part of the Western Australian Bike Network Grant Program.

The Minister for Transport, Rita Saffioti, opened the two-day workshop and acknowledged the 200 guests who had travelled from within WA, interstate and from overseas to participate in the event, which enabled discussion and knowledge sharing about safe active streets and bike boulevard initiatives.

A summary report of the workshop can be downloaded below. For copies of the presentations please email cycling@transport.wa.gov.au