Find out what to do if you have been affected by the Optus data breach.

If you have applied for a new driver’s licence number, you will be required to confirm your request before the number is changed. You will be contacted when action is required.

If you have been contacted by DoT to confirm your request for a new driver’s licence number, you must complete the online form otherwise the number will not be changed.

Complete the online form or read more below about changing your driver's licence number or card.

What is the difference between driver’s licence number and card number? 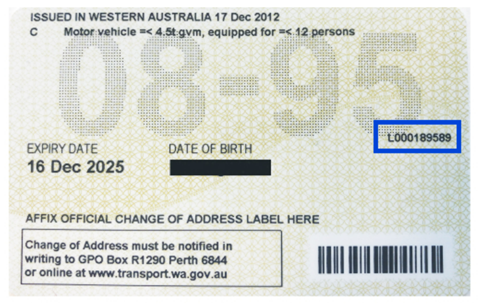 Card number on the back of card.

What do I need to do to replace my WA driver’s licence card with a new card number?

You must attend a DoT transport service centre or regional agent and apply for a replacement card using the Application for Replacement/Certified Copy of Driver’s Licence, Learner’s Permit or Learner Log Book (DL26) form.

This is because both the licence number and the card number are needed to pass a DVS check. A DVS check is used by institutions such as banks to verify a person’s identity.

The vast majority of people who provided their information to Optus before 1 September 2022, would have only provided the driver’s licence number. By itself, this number is no longer enough to complete an online identity check.

How much will it cost to replace my licence card?

If you paid for a replacement driver’s licence card online in DoTDirect between 28 September 2022 and 12 November 2022 you will have a credit applied to your account for the amount paid. You can apply for a refund via DoTDirect.

Will I be able to keep my old licence card?

Yes, you will be able to retain your current driver’s licence card as DoT appreciates customers may need a photographic identity document for other purposes while waiting for a new card to arrive.

Can I get my learner's permit card replaced?

Yes, you can replace your learner’s permit cards by attending a DoT transport service centre or regional agent. The same options for replacing a driver’s licence apply to replacing a permit.

How can I replace my WA Photo Card?

You must attend a DoT transport service centre or regional agent and apply using the Application for Photo Card (PC1) form.

Should I change my driver’s licence number?

The Government recognises, however, that people may still be concerned and is offering impacted customers the option to change your driver’s licence number.

We strongly encourage concerned customers to replace their WA driver’s licence card which will be issued with a new card number in the interim.

How can I change my driver’s licence number?

You must attend a DoT transport service centre or regional agent and apply using the Application for New Licence Number (E126) form.

How long will it take for my driver's licence number to be changed?

Changing a driver’s licence number is a complex process and there will be delays issuing a new number as systems are updated and tested. For more information about action taken by DoT, please refer to the fact sheet below.

What happens if my driver’s licence number is linked to other accounts and agencies?

DoT will work with other key WA Government agencies to ensure your new driver’s licence number is shared as required.