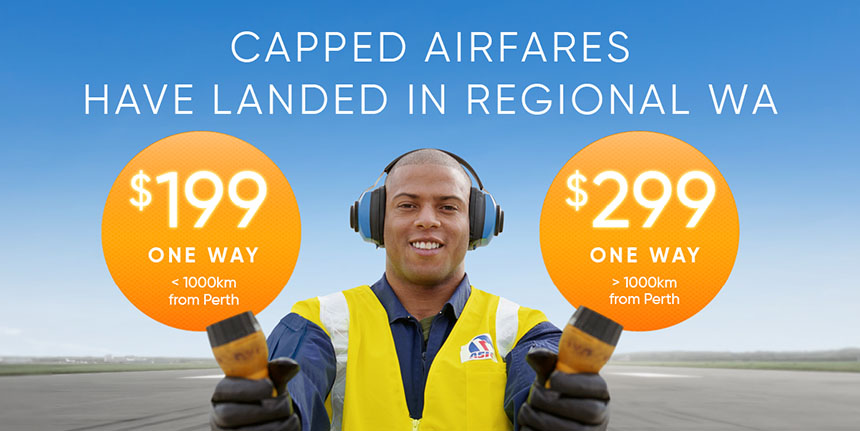 Tickets for Zone Cap fares can be booked through the respective airlines below. Flights start from 1 July 2022.

Who can access Zone Cap fares and how much will they cost?

The Regional Airfare Zone Cap (Zone Cap) is a State Government initiative allowing WA regional residents to access a capped airfare for personal travel on eligible routes to and from Perth, subject to seat availability.

Who is eligible for Zone Cap fares and where can you travel?

Regional residents departing from an airport listed below will pay no more than $199:

* Air services on these routes may not be direct to Perth, however they are regulated air routes and still eligible for the Zone Cap fare.

Regional residents departing from an airport listed below will pay no more than $299:

* Air services on these routes may not be direct to Perth, however they are regulated air routes and still eligible for the Zone Cap fare.

Are there any additional costs under the Zone Cap?

What if I find a cheaper fare than the Zone Cap, can I still take advantage of sale fares?

How can I access the Zone Cap fare tickets?

Note: To get the Zone Cap fare you will need to book a resident fare with your airline. This resident fare will be capped at either $199 or $299 for eligible regional WA residents.

Step 1: Register with the relevant airline to access the Zone Cap fares through their respective resident fare program.

You can find out more information through the links below, or by calling the following phone numbers:

Step 2: Log into the airline’s resident fare portal or call them using the details above, to access a Zone Cap fare. The Zone Cap fare must be booked on a return basis.

The State Government has committed $19.8 million over three years until June 2025, to deliver a Regional Airfare Zone Cap.  The Zone Cap fares will make air travel to and from Perth more affordable and help increase the liveability for regional WA residents.

The Zone Cap is a partnership between the State Government and five airlines: Airnorth, Qantas, Rex, Skippers Aviation and Virgin Australia. The scheme builds on each of the airlines’ resident fare programs by reducing their resident fare prices to the Zone Cap fare of $199 for people living within 1,000 km (by road) from Perth or $299 for people living beyond 1,000 km from Perth. This means that regional residents will never have to pay more than the Zone Cap fare when they travel to Perth (subject to seat availability).

To participate in the scheme, each airline needed to apply to the State Government and have a regional resident airfare program in place.

Regional residents will still be able to access fares below the Zone Cap prices, such as sale fares.

To access Zone Cap fares, residents will need to book a return fare with travel commencing in the regions.

Zone Cap tickets are available for booking from 31 March 2022 through the respective airlines on regional routes for air travel commencing from 1 July 2022.

What are the booking conditions for the Zone Cap fare?

What will happen if I need to change the date of my return flight?

How many trips per year can I book using the Zone Cap fare?

Will the Zone Cap apply all year round or is it only for flights at non-peak times?

Why do I have to be part of the respective airline program?

Do I need to be a member of the airline’s resident fare program in order to access the Zone Cap fares? What if I need to travel urgently and don’t have time to sign up to the program?

Will it cost me any money to be part of the airline residential fare program?