Some DoTDirect services are currently unavailable. We apologise for any inconvenience.

The Department of Transport has completed construction of an improved new weir at Bandy Creek which was damaged by a flood event in February 2017.

In February 2017, the weir was overtopped during a flood event, resulting in significant damage to the structure including erosion of the foundational material and collapse of the southern end of concrete weir structure. The Department of Transport (DoT) has recently completed construction of a new weir at Bandy Creek to safeguard the harbour from future flood events.

Positioned 50 metres upstream from the previous weir, the new structure’s design has increased capacity to handle flood events and is more resilient. The works included:

A structure across the Bandy Creek waterway offers many benefits to the community and environment, such as: 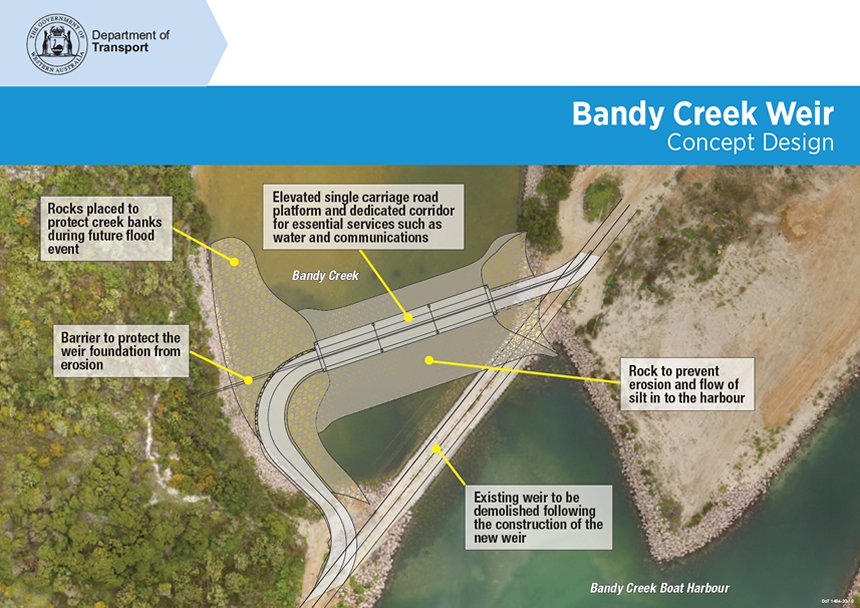 The Bandy Creek Boat Harbour at Esperance will be safeguarded from future flood events following the completion, on schedule, of a $5.1 million replacement weir.

Under contract to the Department of Transport (DoT), WA company Italia Stone Group (Pty Ltd) delivered the nine-month project which included 10,000 tonnes of earth and rock works and saw 400 tonnes of concrete poured. Works were completed in April 2020.

The construction project saw 78 workers employed, including 56 in the region. Aboriginal employment was also supported throughout the works with 15 people employed during the works. 25 local Esperance businesses contributed to and benefited from the project.

The project was completed in compliance with heritage and environmental approvals.

The Bandy Creek Weir structure is insured by RiskCover (Insurance Commission of Western Australia). The reconstruction of the $5.1 million replacement weir was funded primarily from an insurance settlement from RiskCover. Additional funds were also provided by the Western Australia Disaster Recovery Funding Arrangements (known as DRFAWA),  DoT and the Water Corporation.